Fixed a bug in atelier¶

Yet another bug in atelier: #553. Congratulations to Hamza who stumbled over this:

The fab bd command failed to call load_fabfile when trying to write the README.rst file. This didn’t disturb anybody until now because I have a ~/.atelier/config.py file (and when you have such a file, all projects are automatically loaded, including load_fabfile.

While testing above change I rediscovered the Sphinx can generate inheritance diagrams (see 2015-06-29).

Here are some diagrams that might be interesting for Sandeep: 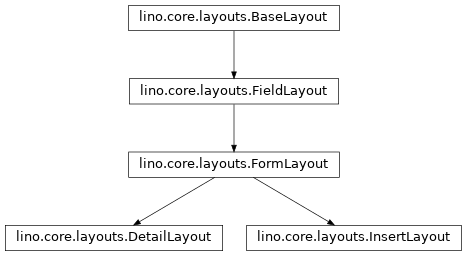 I discovered that the pp script (installed with atelier is not yet documented. TODO: move /scripts to /atelier/scripts and add it to the API.

I finally continued to work on #353. This time we have a much more pleasant general structure because accounting has been moved from lino.modlib to lino_cosi.lib.

This fixture was in lino_presto until now. Next step is to modularize tim2lino. Because e.g. a simple Così customer like apc or fijal is not interested in importing households or calendar entries, but some future customers like spz or myself will want them.

For the first time I had the situation that a customer wants to upgrade to the version “which they have been testing during a week” and not to “the latest available version”.

From now on I plan to name environments simply “a”, “b”, “c” … because virtual environments cannot be renamed, and because a given environment is normally first used for testing and then for production. I can then easily switching between environments because Lino, Django and Apache activates them using the symbolic link env in their proect directory.

When upgrading their testlino env to the newest development version (which now requires lxml), the first attempt of my trick from Tuesday, September 22, 2015 failed:

So I added a deb-src line to /etc/apt/sources.list and did sudo apt-get update. Now it works:

A cool trick: I added an alias to my .bash_aliases:

I also invented the trick of having the following line in the settings.py of all sites:

I updated the /admin/using page of the Administrator Guide with today’s findings.

The Lino documentation has three “guides”:

English is not my native language, but here are some linguistical thoughts. I discovered that the apostrophe seems to be disappearing. Wikipedia removes them shamelessly in articles like User guide and a Tourist guide.

But I don’t agree. An “Installation guide” would be without apostrophe because it is a guide about installation. But our three guides are not about developers, administrators and users, they are written for these people. A linguistic evolution does not become good just because many people are stupid enough to follow it.

So I continue to use an apostrophe. Another question is where to put the apostrophe. I read the discussion User’s Guide vs Users’ Guide, and my opinion is that indeed both forms are valid. It is true that the reader is always only one person (i.e. User’s guide), but it is also true that I as the author write it for many users (and thus I can call it a Users’ guide). So the place of the apostrophe is a question of style or taste.

I still prefer the singular form. My main argument is that users, administrators and developers will almost certainly never read these documents when they are together with other users, adminstrators or developers. (It is difficult enough to get them to read it when they are alone!)

Here is another place where Jonathan Leffler calls it “probably the best choice”.

And if you have difficulties to remember this choice, then I recommend reading The Hitchhiker’s Guide to the Galaxy …