When I exceed my quota, I cannot use the desktop client to remove some folder because the Syncs tab is disabled. 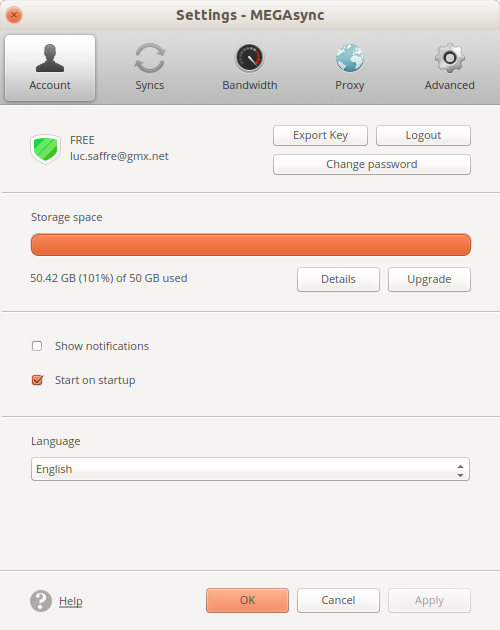 Fortunately I can use the web interface and delete folders and then clear the rubbish bin.

I am having inspiration about how to write a first docker test case. Playing around in a virgin docker ubuntu container:

The first thing to do is to upgrade and to install basic stuff:

Then install getlino (ATM I recommend the development snapshot):

These operations take some time, and we probably want to create a free id on docker hub and publish them. But later. First we continue playing:

This time it works! And it stumbles into the first getlino bug:

The bug is probably trivial: it tries to write the monit conf file before monit is installed. Note that you won’t be able to reproduce above situation since the bug has been fixed meanwhile (see below).

Important : I am not going to fix that bug now. I am going to write a test suite which finds that bug. IOW I want to see above bug on travis.

How about creating a free id on docker hub and publish a getlino image? But wait. Let’s now look at Hamza’s Dockerfile in the getlino repo. Aha, it is not based on ubuntu but on python:3.7. Seems a good idea. Let’s try interactively:

Oh no, this image starts into a Python shell. And when I hit Ctrl+D the container terminates. We need a bash.

But wait, we can say this when starting the container:

Now I can work:

Voilà. That’s what we want to automate! I adapted Hamza’s Dockerfile. It was doing some useless things (like creating a workdir and copying some files), but I see that he found how to create a non-root user. That’s good.

After editing the Dockerfile I must build an image from it before I can run it. The following is again on my machine:

After getting this to produce my traceback, it’s time to automate it (the following is in new file tests/test_docker_prod.py):

So now when I run inv test in my getlino project dir, I get the traceback. Commit and see whether Travis CI agrees. Several more commits to fix a few trivial issues.

I also started moving the getlino docs from the one-page book/docs/getlino.rst file to an independent doctree, which is published at http://getlino.lino-framework.org/

But that doesn’t seem to be enough. Seems that monit does not create a directory /etc/monit/conf.d in that setup.

I found a bit of time to continue entering our purchase invoices into our own Lino Così site.

Before starting I did a release on our site in order to test the latest changes (e.g. Partner detail, #2986, …). Took me some time to realize why the partner detail didn’t become active: our pull.sh was pulling cosi, but our env actually used the PyPI version. (TODO: pull.sh should verify whether the repository being pulled is the same as the one being used in the env).

When the worker pays the invoice¶

I did #3106. Added a new field lino_xl.lib.ledger.PaymentTerm.worker. Added a new site setting worker_model Changed the code in lino_x.lib.mixins.Payable.get_wanted_movements().

Adapted the demo fixtures. The new feature is visible only in lino_book.projects.apc. Wrote documentation and doctest in Internal clearings.