Running Linux on an older PC¶

Ticket #3357 is not directly related to Lino. I am installing LXLE on Ly’s old notebook computer in order to make it quick again so that Iiris can use it. It had become unbearably slow because it has only 2 GB of RAM, and Ubuntu is simply too fat for this old machine. Quote from a discussion on linux.org : “IMO to have an enjoyable 1st experience using Ubuntu 18.04 LTS or any Linux I would highly recommend at least 4.0 GB of memory. From my experience trying to run Ubuntu 18.04 LTS with only 2.0 GB memory will be painful at best.”

LXLE is a “Full featured OS for an aging PC” based on Lubuntu. I chose it after reading 10 Best Lightweight Linux Distributions For Older Computers.

I downloaded an ISO image from https://sourceforge.net/projects/lxle/

How to get the ISO file to an USB stick? This article suggests that that Startup Disk Creator can do it. I had to install python3-coverage before getting it installed: 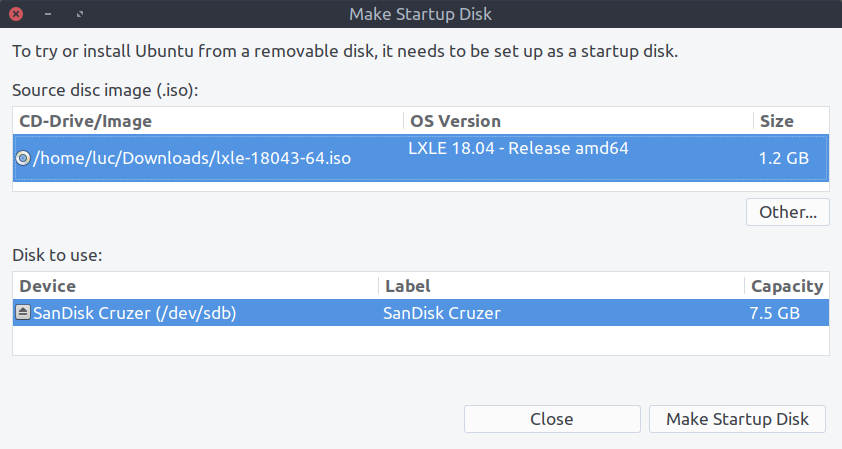 Before it actually starts writing, it asks “Are you sure you want to write to the selected device? All data will be lost.” The operation then takes a few minutes. At the end it says “Installation is complete. You may now run Ubuntu on other computers by booting them with this drive inserted.”

I manually unmounted the USB stick before removing it.

Another article suggests to simply use dd: https://vitux.com/how-to-create-a-bootable-usb-stick-from-the-ubuntu-terminal/

Lino gets ready for Django 3.0¶

It’s already 10 days ago that they released Django 3.0 release candidate 1. Now I did pip install --pre -U django and ran the test suite. I opened #3360 for this.