My third time at HackerX¶

Yesterday I went once more to HackerX, an event where developers can enter for free because they are actually what is being sold. The customers are companies in search of new human resources. I probably don’t fit into their standard product pattern but they invited me. Nice. See also May 2022 and May 2021. 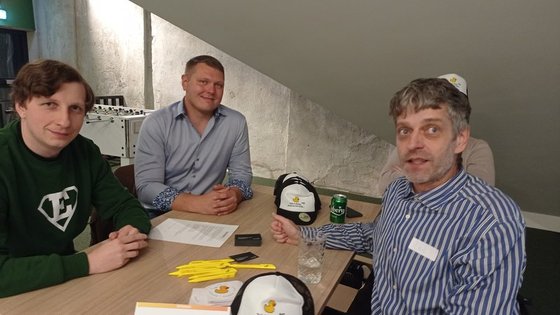 This time there was an employer for whom I would agree to work: Eesti Energia, the public energy company in Estonia. I had only a few minutes of talk with them. I started by saying “So you are the ones who burn down Estonia’s forests. What a shame!” They seemed to be used to that one, they even added oil shale mining, and I admitted “it’s true that the real culprit is the EU who tells everybody that burning wood is a good thing.” I also managed to explain them that I am not for sale without Lino, how Lino might be useful for them and how I might help them to use Lino. All kind of projects where multiple users need to collect, verify, process or query some data.

All other employers were private corporations; I didn’t even try to talk to them. Being an employee means that you give your time and energy away for some higher purpose. The purpose of Eesti Energia is to provide electricity to everybody in Estonia. That’s a purpose I can imagine to work for. But the purpose of every private corporation is to maximize the profit of its investors. I’ll never belong to such a purpose! I explained this several times to other developers. Most of them were younger than me.

But as expected, I met several interesting people among the other developers. There was Kristjan, who might give me a free crash course on the Progress/OpenEdge SQL query tool. There was that guy from Brasil who loves Estonia because you can walk around in the city at 10pm with your cell phone in your hand and nobody will steal it. There was the guy who surprised me because he came from Estonia but didn’t speak Estonian. The Russian-speaking Estonians are a similar to the German-speaking Belgians in that they are a bridge between two cultures. There was Aleksandr, another Russian-speaking Estonian, who didn’t know that there is a country named Belgium, despite the fact that their geography teacher made them cite the NATO members by heart.